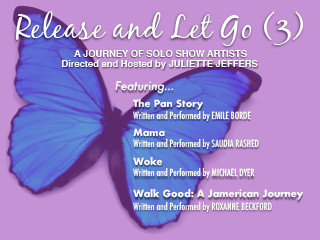 Release and Let Go (3) is the third installment of the journeys of solo show artists developed with and directed by Juliette Jeffers. Sit back and relax as these powerful performers transport you to a different time and place.

THE PAN STORY - Written and Performed by EMILE BORDE
The Pan Story sheds light onto the late great Hugh Borde who was a famous Trinidadian steel pan drummer. He was a pioneer of his time and was appointed the leader of the Tripoli Steel Band in 1951. They traveled all over the world and an opportunity to open for Liberace took their band to a different level!

ABOUT EMILE BORDE
Born in Trinidad and son of the late great Hugh Borde, Emile has emerged as one of the most talented and versatile entertainers in the current steel band movement. He has introduced the “pans” to a wide and surprising variety of music genres ranging from classical to jazz to hip-hop.  He currently performs in public venues and privately for celebrities including Arnold Schwarzenegger, Denzel Washington, Tyra Banks, Kenny G and Barbara Streisand.


MAMA - Written and Performed by SAUDIA RASHED
Saudia uses her Black Girl Magic to tackle the ups and downs of motherhood. She gathers her strength from Wonder Woman, Michelle Obama and Beyonce along the way.

ABOUT SAUDIA RASHED
Saudia is an actress, writer, and creator/host of the new podcast “That One (Blank) Friend”. Her credits as an actress include TV shows like 'Scandal', 'Superstore', and 'How I Met Your Mother', indie and feature films, theater, national commercials;  as well as dozens of sketches written, filmed and performed with the sketch comedy troupe she co-founded, Slow Children Crossing (SCC Comedy). More info about her can be found on her website: www.saudiarashed.com

WOKE - Written and Performed by MICHAEL DYER
By changing your perception, you change your life. Woke is one man’s journey through poverty, abandonment and suicidal thoughts. Through this journey, he discovers a light that can not be dimmed.

WALK GOOD: A JAMERICAN JOURNEY - Written and Performed by ROXANNE BECKFORD
How the littlest Head Girl at St. Andrews Preparatory in Kingston, Jamaica became a driver in a presidential motorcade for the leader of the free world...after pit stops as a beauty queen, a mother of four, and an actress.

ABOUT ROXANNE BECKFORD
Roxanne Beckford was born in Kingston, Jamaica. She graduated from Davidson College with a degree in psychology, then arrived in Southern California after winning a spot in an acting competition sponsored by E! (known then as MovieTime). She started out playing Whitley's cousin on "A Different World" and continued to appear in television and movie roles including Shameless, Criminal Minds and Bringing Home Baby, to name a few. And this was even after marrying her husband and starting a retail business! Having and raising four children, however, was worth taking a hiatus for, so she could play a mom in a minivan in real life. Now, she’s back, and thrilled to be working with Juliette.


JULIETTE JEFFERS (DIRECTOR/HOST)
Juliette Jeffers is an award winning Caribbean American actor, writer, director, producer and teaching artist. On screen, Juliette has appeared in 18 films, 33 guest star TV roles and over 60 national commercials. Some of her notable credits include Chicago Med, Snowfall, Criminal Minds and Grey’s Anatomy. Some of her theatre highlights include her five solo plays ; Batman and Robin in the Boogie Down, (Bronx Council on the Arts Award, Drama Desk, and NAACP nominations), Chocolate Match, Pan Gyul, Judgment Day, and Tio Pablo (in English and Spanish – best play and best actress awards – Hollywood Short and Sweet fest). Juliette teaches acting to inmates in correctional facilities in LA. and she is a private coach and has helped develop and direct numerous solo shows. Juliette was an ovation award voter for two years and is an Advisory Board Member of the LA Women’s Theatre Festival. For more information on Juliette go to www.juliettejeffers.com.