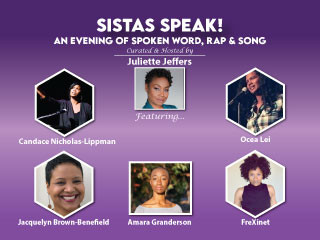 JULIETTE JEFFERS (HOST/POET)
Juliette Jeffers is a Caribbean American actor, writer, director, producer and teaching artist. On screen, Juliette has appeared in 18 films, 33 guest star TV roles and over 60 national commercials. Some of her notable credits include Chicago Med, Snowfall, Criminal Minds and Grey’s Anatomy. Some of her theatre highlights include her five solo plays ; Batman and Robin in the Boogie Down, (Bronx Council on the Arts Award, Drama Desk, and NAACP nominations), Chocolate Match, Pan Gyul, Judgment Day, and Tio Pablo (in English and Spanish – best play and best actress awards – Hollywood Short and Sweet fest).
Juliette teaches acting to inmates in correctional facilities in LA. and she is a private coach and has helped develop and direct numerous solo shows. Juliette was an ovation award voter for two years and is an Advisory Board Member of the LA Women’s Theatre Festival. For more information on Juliette go to www.juliettejeffers.com.

JACQUELYN BROWN BENEFIELD (SINGER)
Jacquelyn is a singer-songwriter who creates music that inspires and empowers us to Love. She has performed as an opening act for Mary J. Blige and Brian McKnight among others, and in ensembles on NBC’s The Voice and HBO’s Ballers. She currently sings at various spiritual centers in the LA area.

AMARA GRANDERSON (POET)
Amara Granderson is a bicoastal actor and teaching artist. Originally from Brooklyn, she is a recent alum of UC San Diego’s MFA Acting program, and holds a bachelor’s in Africana Studies & religion from Oberlin College. With credits varying from Off-Broadway, Carnegie Hall, La Jolla Playhouse, Intiman Theater, to regional theaters and collectives across the country, she finds performance art to be the most effective mode of communication and communion.

FREXINET JOHNSON (RAPPER)
FreXinet is a lyricist, actor, and all-around entertainer. She has been working professionally since the age of 14. This year she has been keeping herself busy working on her music and developing her artistic portfolio. Some of her hobbies include drawing, painting, and writing. Her life long goal is to create a school that offers performing arts lessons to under-served youth. Friends would describe her as fun-loving, energetic, and out-going. In 2012, FreXinet received her B.A. in Theatre Arts and Dance from California State University, Los Angeles. Currently, she is working on her musical debut and looking for projects to challenge and maximize the talent she has to offer.

OCEA LEI (POET)
Ocea Lei was born in Santa Cruz, CA and has been living in Los Angeles for fifteen years. She works in Special Education, and has been performing spoken word since 2012. She writes & speaks about growing up as a Black lesbian in a religious family, her life as a single mom, her experience of homelessness in Los Angeles, and the nuances of growing up with a Black father and an Asian mother. In her free time she enjoys skateboarding and riding motorcycles.

CANDACE NICHOLAS LIPPMAN (POET)
Candace Nicholas-Lippman is an actress, spoken word artist, and arts educator with a passion for using her God-given talents to uplift others.
Candace acting credits include a recurring role on the Freeform/Hulu television series Good Trouble, a recurring role in the new FB Watch series, Airport Security Squad and a guest star role on the hit ABC series, Grey’s Anatomy. This past fall, Candace’s one woman show, A ROSE CALLED CANDACE made its OFF-BROADWAY debut in the United Solo Theatre Festival on Theatre Row, in New York City! You can follow her journey at www.arosecalledcandace.com or on social media, IG: @candace.nicholas.lippman