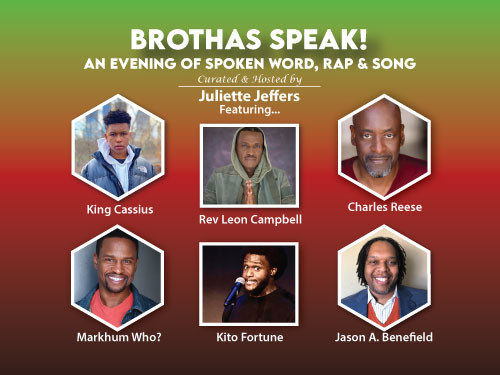 CHARLES REESE (POET)
A thespian and performance artist for more than 25 years, Charles Reese is now streaming on Amazon Prime in the TV sitcom, Beauty and the Baller as the feisty chef, Jalil. Reese is known in the theatrical circles for his critically-acclaimed Off-Broadway performance in Howard B. Simon's production of James Baldwin: A Soul on Fire. Critic David DeWitt of The New York Times called the play, "...funny, thrilling and wise, buoyed by the passionate performance of Charles Reese in the title role.” Reese co-authored the book adaption of James Baldwin: A Soul On Fire, which includes the play version and commentary to pay homage to Baldwin's legacy as an author and civil rights activist. He is the Artist in Residence for the James Baldwin Writers' Colony at the Emerson College European Center-Kasteel Well in the Netherlands. Reese is currently represented by BH Talent & Literary Agency.

MARKHUM WHO? (POET)
Markhum Who? graduated from Georgetown University. While there he discovered a new talent and won Georgetown’s Kreeger Award for Acting. Much to the dismay of his parents he scrapped his original plan to obtain a JD/MBA for the much more safe and stable career of actor/writer/director/producer/poet/comedian/substitute teacher/museum curator/Lyft&Uber driver. He is a published poet (Strugglin’ 2B Free by Veracity Press) and has appeared in several productions including his hit one man show,The Rev. at the Church of E.L.V.I.S.$.

REV LEON CAMPBELL (SINGER)
Rev Leon Campbell has been the Director of the Agape Youth and Family Ministry since November 2004. Leon started singing at age 12 in churches throughout Chicago. He studied Music at the Columbia College in Chicago and the New England Conservatory of Music in Boston.
His musical career extends over 30 years of singing in industrial commercials for many corporations and singing background for numerous recordings artists. He sang with the Agape International Choir for 12 years and with Agape’s all-male singing group, The Feelings Tones.
He recently completed his first music CD entitled “Dearly Beloved, Songs, Sonnets & Stories”.

JASON A. BENEFIELD (POET)
Jason is from Buffalo, New York. He transforms lives as an inspirational speaker and coach. He has an Associates Degree in Business and Music. In 8th grade he was in a production called “Kids” and performed his first one man show in September 2019 called, “Shhh! Shut Up!” He enjoys writing and producing music, writing poetry and spending time with family. He is currently in his second year to become a licensed Spiritual Practitioner.

KING CASSIUS (RAPPER)
King Cassius is a 19 year old hip hop artist from Los Angeles. Always staying outside the box, King Cassius provides "the sound they want and the lyrics they need." A rising sophomore at NYU’s Clive Davis School of Music, King Cassius always strives to learn and grow. He has music featured in TV shows, such as Black Lightning, Shots Fired, and many more. His songs equate to more than 1 million streams! He is the next big thing!

KITO FORTUNE (POET)
Kito Fortune is a spoken word poet based in Southern California. He started his career in Trinidad as a member of the 2 cents movement. Kito's writing is dedicated to the education and uplifting of young black men through sharing his own experiences. He works for the New Earth Organization with young people in jail, teaching poetry, hip hop and music. He is a 2 time Grand Slam Champion of the Hollywood Slam team, and finished 2nd in the National Poetry Slam with the team in 2018


JULIETTE JEFFERS (HOST)
Juliette Jeffers is a Caribbean American actor, writer, director, producer and teaching artist. On screen, Juliette has appeared in 18 films, 33 guest star TV roles and over 60 national commercials. Some of her notable credits include Chicago Med, Snowfall, Criminal Minds and Grey’s Anatomy. Some of her theatre highlights include her five solo plays ; Batman and Robin in the Boogie Down, (Bronx Council on the Arts Award, Drama Desk, and NAACP nominations), Chocolate Match, Pan Gyul, Judgment Day, and Tio Pablo (in English and Spanish – best play and best actress awards – Hollywood Short and Sweet fest).
Juliette teaches acting to inmates in correctional facilities in LA. and she is a private coach and has helped develop and direct numerous solo shows. Juliette was an ovation award voter for two years and is an Advisory Board Member of the LA Women’s Theatre Festival. For more information on Juliette go to www.juliettejeffers.com.